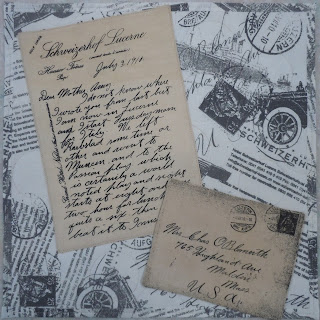 A friend & I have been our guilds' 12" x 12" coordinators this year, hoping that we would get
a mostly traditional group to try something new. So far we have not been as successful as we had hoped, but we have a few more months to "work on them". The theme for September was LETTER/ Letters.
I based my quilt on a letter written in 1910 by my grandfather to his mother and sister. He was a 20 yr. old chauffeur for a woman "of means" from Geneva, New York. Mrs. Veil decided that she wanted to do the "Grand Tour" of Europe, so she, my grandfather and her Packard sailed on May 4, 1910 on the Adriatic, a sister ship to the Titanic, for France.
I silkscreened the background with images of the Adriatic, Packard, current information on the
Schweizerhof Hotel in Lucerne, Switzerland and enlargements of the addressed envelope. The letter and envelope were silkscreened on vintage cotton that I tea-dyed. I am very pleased with the result.
Posted by Andrea at 4:20 PM 7 comments: