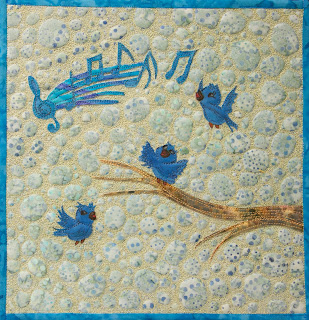 When this challenge word was announced, I initially had two thoughts – bluebirds and the song made famous by Marty Robbins in 1955, “Singing the Blues.”  So I thought, why not combine them?  I found drawings of bluebirds in coloring books, but they were all happy looking birds.  I liked them, so I decided my 3 happy bluebirds would be singing the blues AWAY!

I drew, as best I could, 3 birds, attached Wonder Under to a medium blue batik fabric.  Then I penned each drawing to the fabric with pens and cut them out.  Once cut out, I drew faces on each with a Micron Pigma pen.  Then I used fabric pencils and pens to highlight their features. Once I was satisfied, I ironed each bird in place, perching two up in the sky and one on a fused tree branch, an idea I saw in the coloring book.  Then I added a music staff with musical notes flying away.  It reminded me of the happiness I felt years ago each time I heard my now adult daughter, Cammy, happily practicing the flute.

All of my fabric choices are batiks.  The birds, tree limb and musical staff and notes were fused using Wonder Under.  Instead of 3, there are 4 layers to my quilt.  I fused the front fabric with the design in place onto a layer of batting.  Then I fused the back fabric to a piece of Timtex cut to size.  Finally, all 4 layers were fused together.

For the machine stitching, I used a selection of Ricky Tims Superior Art Threads to give the quilt some nice sheen. The Timtex acts as a stabilizer which adds to the quality of the machine stitching. With this challenge, I decided to use a technique that I learned in a class with Cindy Needham that she calls " micro quilting." For a contrast with background fabric - a blue polka-dot - I used a Ricky Tims light turquoise thread.

In this technique you free-motion quilt varying sizes of circles onto your background fabric.  Once they are done, you go back over the un-quitled areas with teeny tiny stitches in the shape of circles until all the fabric between the circles is completely covered with thread.  Cindy uses this technique in small areas, but silly me, I decided to cover the entire 12x12 in micro quilting.  Although it may not look like it, I spent hours and hours on this technique.  I DO like the effect, but next time I try it, I will definitely stick to smaller areas where I just need a few circles to pop!