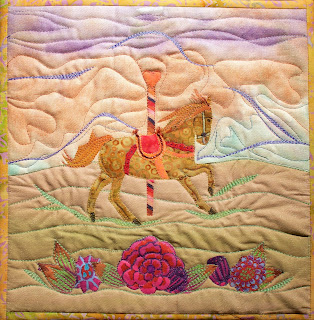 When this word was chosen as our theme, I had just finished watching Mary Poppins with Sea Green, the 8 year-old Burmese refugee we sponsor.  I love horses and adored the scene where the horse jumps off the carousel and romps through the flower-filled open space.

As a child, it was a rare treat to have a carousel in town, and especially to get to ride on one.  I loved picking out the most beautiful horse and riding 'round and 'round.  As a young parent, I have fond memories, as well, of my girls as they rode carousel horses.

So when this word was announced, my immediate thought was to feature a carousel horse and base it on the words "super," meaning above and beyond and "cali," which means beautiful. Thus, "Super Callie" the horse was born. 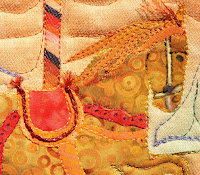 My horse was drawn using a coloring book rendition.  I used a piece of hand-painted fabric for the sky - one that I painted, by the way, right after our class with fellow Maven, Jane.  Thanks Jane! The “land” at the bottom is a remnant from a Sky Dyes fabric. Various batiks were raw-edge fused to create my colorful "Callie." The pole is from a mini chevron fabric from Michael Miller, the
flowers are Kaffe Fassett prints and the binding is a batik.

I wanted the scene to look very mystical, so I covered the entire
quilt with light beige tulle.  I stitched around the horse's body
before cutting away the tulle just from the body of the horse to
make it more pronounced.  I used Ricky Tims "Art Studio Colors"
thread by Superior for the quilting.  Thread painting is a new technique that I am practicing, so I decided to try a small amount in the sky, the grass and around the flowers.  The final touch was the use of decorative thread on Callie's saddle and headdress.