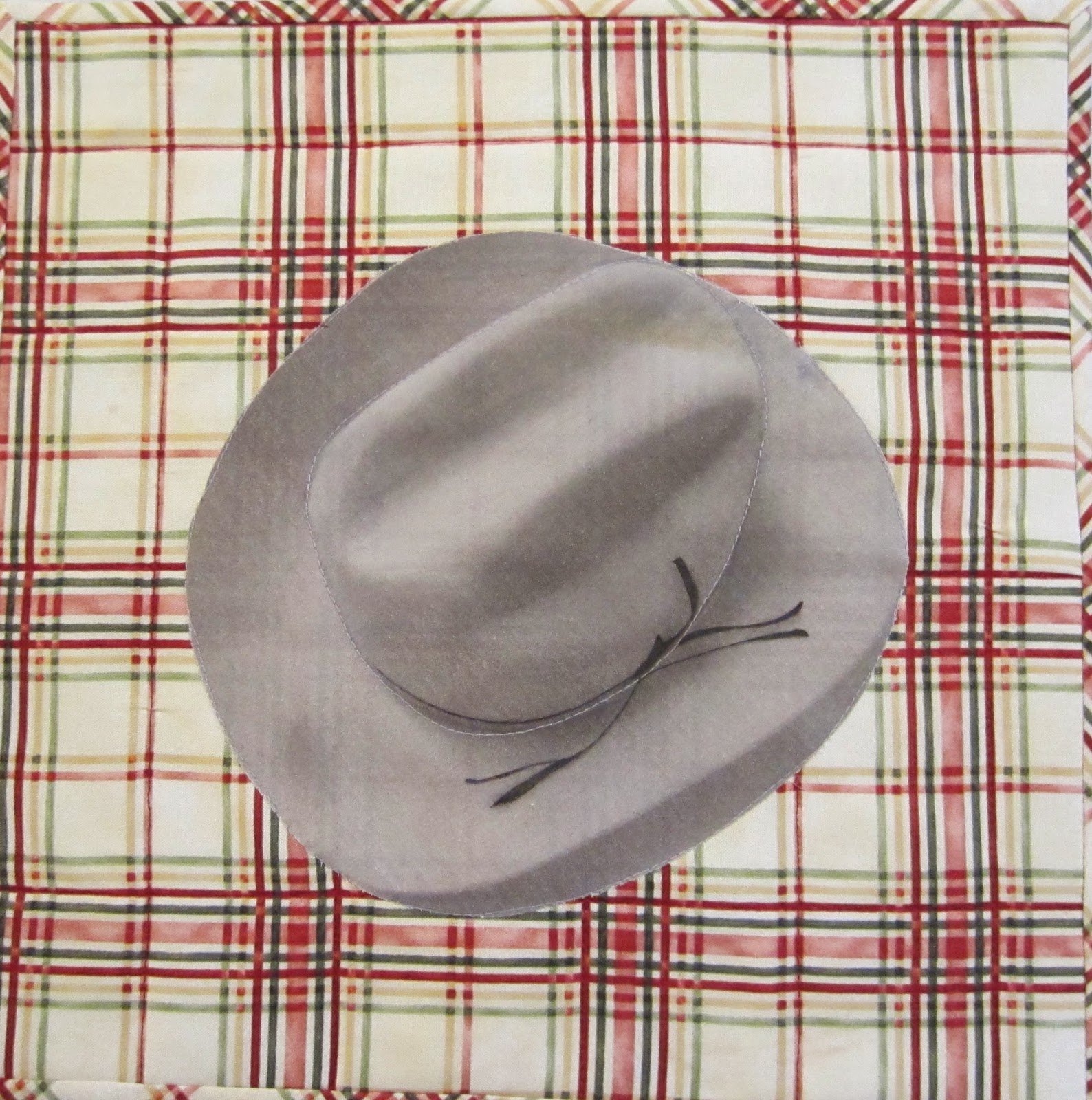 A few months after my father passed away all of the family gathered at my stepmother's home to go through my dad's things. It was a good day and painful at the same time. We laughed and we cried and at the end of the day we went our separate ways. I came home with my dad's beloved Stetson hat and put it away in a closet.  It was simply too painful for me to deal with it.

When I took it out of the box to take a picture for the quilt I was surprised to see a card in the box. It contained an expression of love from my stepmother to my dad, hidden under the hat form in the box. My dad was of the generation that did not express feelings easily. He was born in Oklahoma in 1913 and had survived the drought, the dust bowl, the crash of 1929, the Depression, World War 1, World War ll, Korea. I never knew a time when he did not have at least two and sometimes three jobs to support our big family, but he never complained. He was not demonstrative, but we knew he loved us.  The only time I saw him cry was when my mother died. He was left with four girls to raise, a baby, a seven year old, a fourteen year old and a seventeen year old. My childhood ended that day, for there was always work to do. I had to become a mother myself to understand the strength it took for my dad just to get through the day. He was left with huge medical and funeral debts that took him years to pay off. He had to leave us home alone to raise ourselves.  He worried all day that something bad would happen while he was gone.

I have had a hard time writing this because I was the last one to see him. We had gone to Oklahoma City for Easter and I got up at 5:00 A.M. to beat the traffic. He was sitting in his recliner in the dark, something he did when he was worried or did not feel well. I said my goodbyes and drove the six hours home only to get a phone call from my sister saying he had gone to the emergency room after we left and had passed away. I wish I had not rushed so much to leave, I wish he had told me he was sick, I wish, I wish........the list is endless. One last thing, on the brim of the hat you will see a dark smudge. My dad always removed his hat when speaking to a lady and when he was indoors. I made the quilt out of simple plaid material.  He loved plaid and his hat.  This is a quilt for a simple man who was very much loved.

[I was happy to post this for Janet, given her current difficulty with typing!] 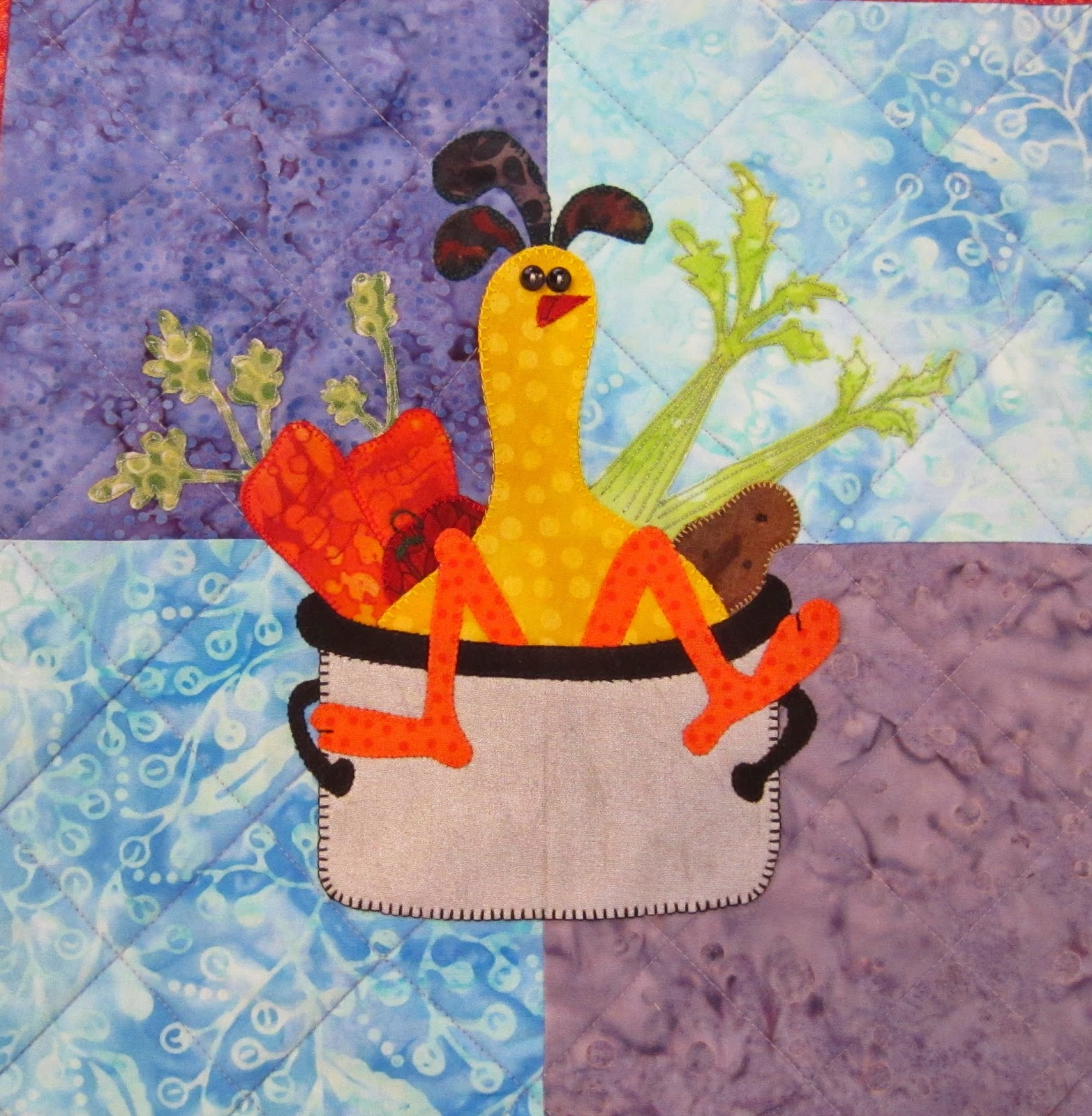 As you all know by know I have a dilemma that I will have to struggle with for probably the rest of this year. It dawned on me that I have a box of experiments and quilt squares that I did not want to make a quilt out of that I could make good use of, solving the sewing problem. I did not get to make a quilt for my own word Comfort and I had the perfect quilt square in the discard box, chicken soup. It hit me when I was having a bowl after my trip to the hospital last week. Doctor's have found that it can actually have some benefit, whether it is the ingredients or it is psychological who knows and who cares. When I'm sick I want chicken soup and Vicks Vapo Rub. I'm not sure it does anything but that is what grandma always did and somehow it makes me feel better!

[Note from Alice:  Janet sent this to me for me to post, because of her inability to use her left arm and hand--thus typing is hard for her!]