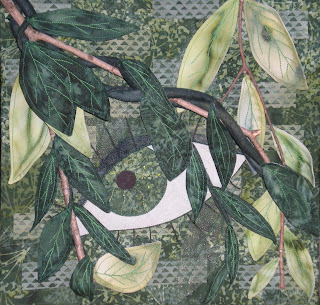 Despite choosing the theme, I spent a lot of time on what I would choose to represent "green".   Green houses, green thumbs, green sleeves and green doors were some of my first ideas.  While perusing quotations using the word green, I came across this one from author Ed McBain: "eyes as deeply green as an amazonian jungle".  I immediately imagined lush green foliage with an eye peering through and I set out to portray this scene.

My background was made by fusing mottled green batik rectangles randomly on top of a leafy green batik.  I was inspired by Gloria Loughman's technique to create backgrounds as in her book Radiant Landscapes and used a modified version.  I created the eye by fusing a green batik for the iris and black pupil onto the white eye.  Green tuille was used to soften the brightness of the white and I then stitched the eye to the background.  I machine quilted flecks of lime green with stitching in the iris and added some beads for sparkle. Navy tuille was used to create an eyelid and lashes were machine stitched with black thread, then enhanced with pigma pens.  The background was then layered with batting and backing and machine quilted using a serpentine stitch. A few leaves of organza were stitched on top of the background just above and below the eye which are more visible in the close-up. 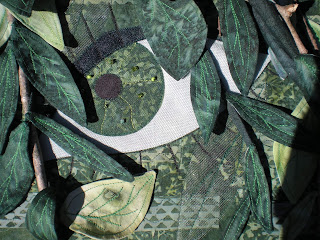 I like the effect of the organza leaves on top of the background and plan to use this technique as well as the background process again.  The quilted background was then wrapped around a wooden frame.

Ok, this is where the jungle took on a life of its own!!!  In order for the eye to "peek" out, foliage had to be added.  Leaves of light and dark green were fashioned using batiks and fusible interfacing and then veins were machine stitched.  Real branches were added and attached with hand stitching and vines of fabric covered twine were wrapped around them.  I then added the leaves and loosely tacked those to the background so they remained as three dimensional as possible.

I had a of fun with this theme.  I hope you all enjoyed it as much as I did.