Janet's Circle- "Will the Circle Be Unbroken" 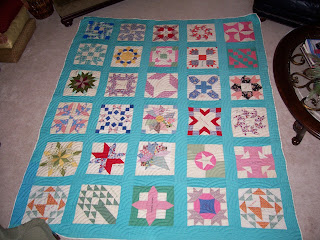 Janet's Circle – “Will the Circle Be Unbroken”


When I saw this quilt assignment the first thing I thought of was a much beloved hymn we sang growing up called “Will the Circle Be Unbroken” by Ada Ruth Habershon, 1905.  That started me thinking about my grandmother and her circle.  She did not have a quilt guild or a bee, what she had was a sewing circle.  It was the only time I ever saw her take personal time because she rarely sat down and her day started in the dark and ended that way.  But the Tuesday sewing circle was never missed.  It was a group of women who lived on surrounding farms and whose lives were interwoven on every level.  My mother and father's families came to the Oklahoma territory for the land run.  Since German was the first language for some of the families they ended up with pieces of land all close to each other.  When you drive through the area even now it is the Beck place, the Stein place, the Sisler place, the Wile place  on and on even though no one but my grandmother had lived out there for decades.  She was one of those rare people who lived in three centuries and it boggles the mind when you think what was invented in the 105 years she lived.  She was fortunate in that she had a treadle sewing machine as a lot of them could not afford one.  That is how I learned to sew when I was seven and if you have never sewn on one it is an experiment in terror especially at the age of seven.  So the circle met every week and worked on whatever they needed to attend to or to quilt if someone had one ready to go.  The picture is of a quilt that I have seen on both sides of my family.  Six of the  squares are my mother's  mom and grandmother and my father's mother, aunt, and two sisters.  They each had to make thirty of the same square by hand and I have trouble generating one 12 x 12 quilt in three months with a sewing machine.  What was so special about this circle was that they  were there for each other  to deliver babies, cook meals when there was sickness, take over chores when there was a death in the family, band together when the crops needed to be harvested and canning days when the temperature in the house had to be way over 100 (my grandmother canned well into her 100's).  They did all of this with no modern conveniences, no electricity, no indoor plumbing, no running water and no complaining.  Since my  grandmother raised me she is the voice in my head.  Laying in the hospital feeling sorry for myself  I could almost hear her say “you are in a nice air conditioned room with drugs and nurses and a color tv so straighten up”.   Due to some set backs with my health and some upcoming surgeries I will not be sewing for a while.  My husband generously offered to sew the quilt for me but I don't feel well enough to design one so I hope you will enjoy the picture of a quilt that is beyond priceless to me, made by a generation of women we can only hope to live up to.  Thanks grandma, I will try to straighten up.